Like many first time parents I was eager to learn healthy and natural alternative ways to feed my child (Read about Essential Oils HERE or BabyWearing HERE). I ran out and bought a Baby Bullet thinking I would puree all my own foods etc. Then I was introduced to a concept I had never heard of before- Baby Led Weaning (BLW).  This concept, once I read up on it, seemed more natural and intuitive than pureeing, certainly easier for us on the preparation side. I have 2 sons now and at the time of this blog they are 3 years and 1 years old. They actually both reacted to baby led weaning differently but ultimately baby led weaning has been our sole source of food for our toddlers.

Where to Find Resources:

I joined a few Facebook groups for supporting baby led weaning and the sharing of recipes. I tend to like to immerse myself in a subject before I jump in so I lurked in these groups for a couple months. I also found a Baby Led Weaning book by Gill Rapley and Tracey Murkett and read that.

When do you start?

A big question I had was when to start baby led weaning. After some research the magic number seemed to be 6 months or older. A few things I read referenced leaky gut syndrome with the possibility that their guts aren’t ready to handle anything but breast milk or formula for the first 6 months.

Here is a quick list we referenced after they hit 6 months:

Once those are all yes’s which on average is about 6 months that’s when we started BLW.

What do you feed them in the beginning?

Another big question I had was what exactly can they eat? I mean it seems so simple right? But my experience was only with formula fed babies and jars of food combinations I wouldn’t think to ever eat together. As a personal preference in our family based on my husband’s research we did not do any grains until their molars came in (and even then very limited).

We ultimately offered one food and waited 1-2 days before introducing another one so that if an allergic reaction occurred we could better isolate what food may have caused it.

Here were our first 10 foods: 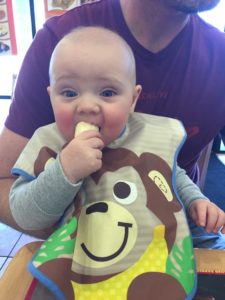 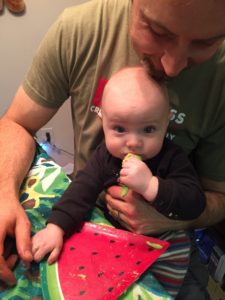 What can’t they eat?

Some of what they can’t eat is a preference (for us no grains, only natural sugars) and some is based on guidance from the book and other mom’s experiences. We now know that keeping allergenic foods away can actually create those allergies in your child. The current recommendation from our pediatrician was unless there was a family history of an allergy, no foods were off limits for the purposes of allergies, like no peanuts etc. Honey was the only limit to not have any until after 1 year old due to botulism fears.

There were, however, some cautions with foods:

How much will they really eat?

In the beginning for us, the answer was… like none. Haha. But really- it appears as though not much is being consumed so much as it’s being smeared on the high chair and all over their face and body.

But some great skills are being learned. 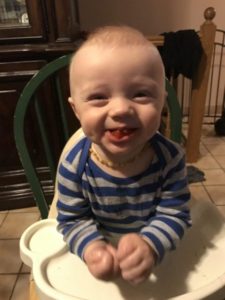 No. It is still the recommendation that Breast milk or formula is primary until one. To help keep that as the primary source it is helpful to offer the breast (or bottle) first then a selection of foods. Like I said earlier, in those first few months of BLW they are consuming little. My sons are both boob boys and there is no food that takes the place of that. For my first son he didn’t really start eating any actual amounts of food until about 15 months. My second son has been very interested in food since right at 6 months (he’s currently 13 months). 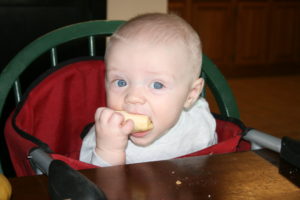 Can your child eat both via BLW and some purees?

Sure. I’m all for- FED IS BEST.  I can say that between my 2 sons I had vastly different outcomes. My 1st son wanted literally NOTHING to do with us helping him eat. Ever. My second son happily lets you spoon-feed him yogurt and applesauce etc. Sometimes he takes the spoon and does it himself and sometimes he doesn’t. Kids are all very different and I find it best to take their lead. 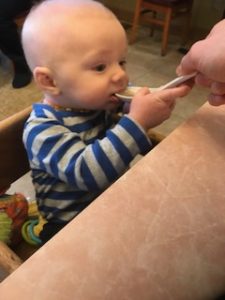 This was probably my biggest fear. It’s scary to think of your child choking. In my experience we did not have any scary choking incidences. There were a couple of coughs while they learned to chew THEN swallow but on the whole we were lucky in this regard. To make me feel more prepared I did take an infant CPR class that included choking training.

All in all, baby led weaning has been great for our family. We don’t have to have special jars of food with us or on the go. At any restaurant you can get one of the top 10 foods as a side dish or pull parts of your meal to give them.  My sons both eat a very healthy diet of fruits, veggies and meats. We do have some treats of dark chocolate, some frozen banana-strawberry and coconut milk ice cream and gluten free pancakes. But on the whole they all eat very well! We don’t keep processed foods or sugars in our house so they simply aren’t an option. 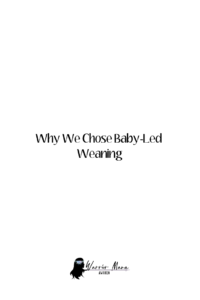 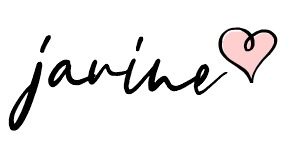 Previous Post: « 8 Ways to Stay Motivated in Your Personal Life
Next Post: Top 3 Baby Carriers to use from birth to Toddler-hood »